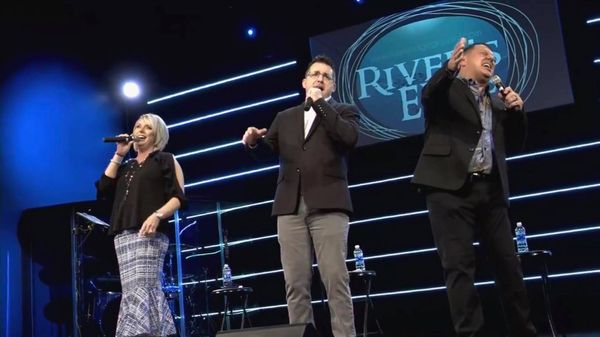 In ministry the following words carry deep meaning; experienced, seasoned, talented, reliable, real, and anointed. When pastors and promoters are asked about Nashville Recording Artist River's Edge, those words are often used in some combination to describe this trio. But for these three who stand together on the platform it 's all about a joint passion to clearly communicate the Gospel and offer the hope only found in Christ.

John Wishon serves as lead and tenor vocalist for River's Edge as well as handles the stage emcee work for the group. John sang with his parents for 32 years in their family group. John owns a Christian radio station in Wilkesboro, NC and is one of the most sought after evangelists and revival preachers on the east coast. John's wife, Rebecca has been singing gospel music for virtually her whole life. The daughter of a pastor, she began singing at a very young age.  Night after night, Rebecca amazes audiences with her powerful, from the heart vocal abilities. Rebecca is a physical education teacher at Mountain View Elementary School in Hays, NC. Rebecca and John have two beautiful children, Miles and Riley.

Tenor, John Blackburn is a seasoned veteran of the Gospel stage. Audiences love John for not only his vocal ability but for his magnetic personality. John and his dad own a painting company. He and his wife Amber live only 10 minutes from John and Rebecca in Wilkes County, NC.

The group's first eight national radio releases have reached the Top 50 on the Singing News national Southern Gospel Music Charts. Their single, "Redeemed", spent six months on the chart in 2019 and peaked at 32 in November.  “Hallelujah For The Cross”, was the Top 40 follow up single for the group and it paved new roads and opened many new doors. In 2020 "I'll Have To Run", spent six months on the chart, peaked at number 34 in the nation and garnered over 400,000 views on social media. In 2021, two radio singles made their way into the Top 40, "The Beatitudes Song" and "Call On His Name".

In 2020, an agreement was reached with Godsey Media Management to grow the social media and digital ministries of River's Edge. Through that partnership, the trio's music can now be heard and purchased through all of the major online streaming and download platforms. River's Edge is making friends all across the country and fans honored them with two award nominations in the prestigious Southern Gospel Diamond Awards. The group was blessed to win Sunrise Song of the Year in 2020. 2021 was an exciting and busy year. River's Edge was a featured artist on Singing News TV's new series called "Ascending Sounds". In addition, in October, 2021 the group won the coveted Diamond Award for Sunrise Trio Of The Year.

The members of River's Edge love the harmony they sing and the fun they have together on the road. John, John, and Becca are humbled by the success of their songs. However, at the heart of this group, you will find a passion for ministry. River's Edge is committed to boldly proclaiming that Jesus really does love you, he cares, and he understands.